The author of the Roman de Troie names himself as Benoît de Sainte-Maure at the end of the prologue (v. 132), and as Benoît elsewhere in the narrative. Little is known about him other than that which can be gleaned from his writings. That he was a clerk who hailed from the Touraine is all but certain. That he was in the service of Henry Plantagenet and his wife Eleanor of Aquitaine is highly probable, although the praises he sings for a 'riche dame de riche rei' (v. 13468) are no longer considered a dedication to Eleanor in stricto sensu (Broadhurst 1996, Mora-Lebrun 2008). It is also likely that our Benoît and the Benoît commissioned by Henry Plantagenet to write the Chronique des ducs de Normandie were one and the same, although this has been much debated over the years (Baumgartner & Vielliard 1998, 18-9).

A date of c. 1165 is typically given in modern scholarship for the composition of the Roman de Troie. This is to some extent based on Benoît's eulogy for the 'riche dame', which, if it is indeed a reference to Eleanor of Aquitaine, would surely have been written after 1156 (by which time Henry had largely pacified his kingdom) and before 1173 (when Eleanor was imprisoned by her husband). Comparison with two other romans antiques, the anonymous Roman de Thèbes and Roman d'Énéas, traditionally dated c. 1150-1160, suggests a later date for the Troie (Faral 1913). 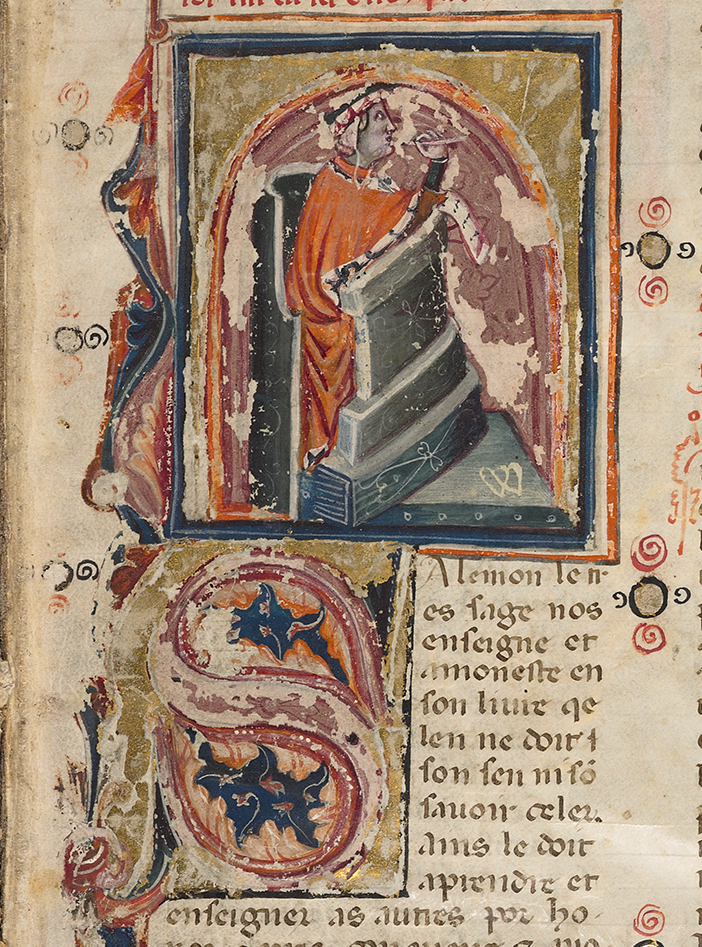 Benoît tells us in his prologue that he wishes to translate a Latin estoire into the vernacular tongue to produce a roman that can be enjoyed by those who lack Latin (vv. 33-9). The modern title for the work is inherited from medieval copyists, who more often than not labelled it as the Roman de Troie (e.g. Paris BnF f.fr. 1450, and Paris BnF f.fr. 1610). Other titles found in medieval manuscripts include Ystoire de la grant destruction de Troie la grant (Paris BnF f.fr. 19159), Estoire de Troye et de Greze (Vatican BAV Reg. Lat. 1505), and, more simply, Troie la grant (Montpellier BIU H 251; Paris BnF f.fr. 794).

The complete texts of the Iliad and the Odyssey were unknown to the medieval West, even in Latin translation. The story of Troy nonetheless circulated widely in the form of Latin summaries of the Homeric poems, most notably the hexametric Ilias Latina. Two abbreviated texts in late Latin prose were held in particularly high esteem in the Middle Ages, in no small part because they purported to be eyewitness accounts of the Trojan War: the De excidio Troiae attributed to Dares the Phrygian supposedly provided the Trojan perspective, while the Ephemeridos belli Troiani of Dictys Cretensis ostensibly gave the Greek point-of-view. These were Benoît's two principal sources for his Roman de Troie. For the bulk of the narrative, including the first destruction of Troy, Paris's abduction of Helen, and the ensuing decade-long war between Trojans and Greeks, he followed Dares's account, but from the Fall of Troy to the adventures of Ulysses, he also drew upon Dictys (Rollo 1998).

At the end of his prologue, Benoît pledges to follow the text of his Latin sources to the letter, nonetheless granting himself licence to add 'aucun buen dit' as he sees fit (v. 142). Nowhere are the amplifications he made to his sources more apparent than in the tales of love woven into the scenes of martial prowess: not only did Benoît, influenced by Ovid and Virgil, expand upon the amorous relationships he found in his sources - between Achilles and Polyxena, for instance - he also invented the story of Troilus and Briseida, which would later be taken up by Chaucer, Boccaccio, and Shakespeare (Kelly 1995).

By re-forging a Latin estoire into vernacular octosyllabic verse, Benoît was following in the footsteps of the anonymous authors of the Roman de Thèbes and the Roman d’Énéas. If each member of this so-called Classical trilogy of romans antiques constituted an exercise in translatio - Thèbes from an abridgement of the Thebaid of Statius, and Énéas from Virgil's Aeneid - each was also an exercise in translatio imperii: power passes to Athens in Thèbes and to Rome in Énéas, while in the Roman de Troie it will ultimately be transferred to the Trojan colonies founded by Aeneas and Antenor. Considered alongside Wace's Roman de Brut, which gives Trojan ancestry to the Britons (via Aeneas), and Benoît's own Chronique, which casts the Trojans as ancestors of the ruling Plantagenets (via Antenor), the Roman de Troie tells a non-biblical account of the very foundation of Western civilisation (Kelly 1993).

Benoît's Roman de Troie spawned a rich descent in several different languages in addition to French. Five distinct renderings into French prose, from the 13th c. and later, have survived. At least three of these were produced outside of France, and one was no doubt made specifically to be inserted into the Second Redaction of the Histoire ancienne (see: Textual tradition). Alongside translations into Dutch, German, and Spanish (among other languages), the Roman de Troie was rendered into Latin prose as Guido delle Colonne's Historia Troiana, which circulated even more widely than the Troie itself in the later Middle Ages (Constans 1912, VI:265-345). The ambition Benoît expressed in his prologue to spread the story of Troy far and wide (v. 129) certainly seems to have been fulfilled.