Most scholars would place the composition of the earliest version of the prose Tristan between 1215 and 1235. The Lancelot-Grail Cycle, from which the authors clearly took inspiration, was composed no earlier than 1215, and the Guiron le Courtois and Suite du Merlin, both indebted to the Tristan, were composed in 1235-40 and 1230-40 respectively (Curtis 1963, Baumgartner 1975).

The names of two authors are mentioned in the manuscripts that have come down to us. If a prologue is present, it tends to be signed by a certain Luce del Gat, who claims to be an English knight from near Salisbury and to have translated the material from Latin. In those manuscripts preserving an epilogue, however - and that includes three of the earliest (Paris BnF f.fr. 104, Paris BnF f.fr. 1463, Paris BnF f.fr. 1628) - it is Helie de Boron who claims to have toiled for over five years on the text, having drawn on material from Luce, Walter Map and Robert de Boron (to whom, he tells us, he is related). The matter is further complicated by the presence of a prologue in four manuscripts (Paris BnF f.fr. 756, Edinburgh NLS Adv. 19.1.3, Vienna ÖNB 2542, and Ghent BU 6), in which Luce and Helie are jointly held responsible for the text. In all likelihood, one author began the project of the prose Tristan and his work was then extended by another. We have no reason to believe, however, that the names are anything but literary pseudonyms, and the relative contributions of 'Luce' and 'Helie' remain unclear (Curtis 1958, Baumgartner 1975, Curtis 1983, Baumgartner 1985). 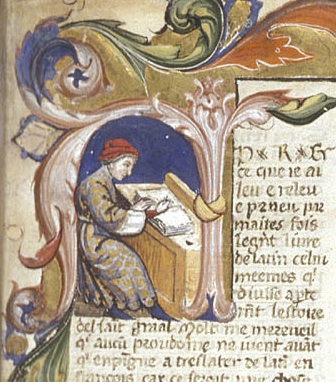 With two authors come two medieval titles. Luce's prologue introduces the work as L'Estoire monseignor Tristan, while Helie's epilogue generally calls it Li Livres dou Bret (for reasons that are not apparent). Both names are provided from the outset, meanwhile, by the four manuscripts listed above whose prologues assert dual authorship. Medieval rubricators employ a variety of titles, usually along the lines of 'Li roumans (or 'Li livres') du bon chevalier Tristan' (e.g. Malibu Getty Ludwig XV), often mentioning that Tristan was the son of King Meliadus of Leonois (e.g. Aberystwyth LlGC 5667 E), and sometimes including the name of Iseut (e.g. London BL Royal 20 D II). Few rubricators give 'li Bret' as an alternative title (but see BnF f.fr. 104 and ÖNB 2542).

The 12th-c. verse romances of the Tristan legend provided the raw material for the prose Tristan. Indeed, the basic outline of the story told by Béroul and Thomas (amongst others), especially the episodes between Tristan's birth and his marriage to Iseut aux Blanches Mains in Brittany, is immediately recognisable in the 13th-c. prose texts. What is altogether novel, however, is the integration of the Tristan material into the world of King Arthur and the Knights of the Round Table. Particularly following the hero's marriage to Iseut aux Blanches Mains, Tristan will engage in chivalric exploits to rival those of Lancelot and Galahad.

The debt to the prose Lancelot-Grail here is significant: the Tristan not only draws upon its setting and cast, but most versions also interpolate entire episodes, most notably the whole of the Queste del Saint Graal. Such interpolations no doubt inspired later adapters to incorporate further Arthurian narratives into the romance. The love potion may remain the eventual cause of the lovers' demise, and the countless tournaments and quests may find themselves punctuated by lyrical laments, letters and lais, but the overall emphasis has shifted away from the love between Tristan and Iseut to give equal attention to Tristan's chivalric prowess.

In modern times, the prose Tristan was initially read by scholars hoping to trace the influence of the 12th-c. verse texts, or alternatively to pinpoint sources for the works it inspired in English, Italian, Castilian, and Portuguese. It is increasingly read in its own right, however, especially since the publication of editions based on Carpentras BM 404, ÖNB 2542 and Paris BnF f.fr. 757. Though modern readers remain more enamoured of the works of Béroul and Thomas, it was chiefly through the prose Tristan that their medieval and early modern counterparts enjoyed the legend of Tristan and Iseut.